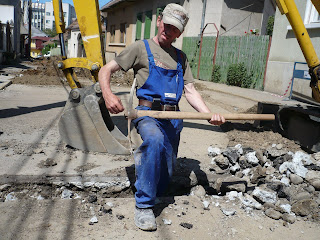 Cinema Progresul, or the Poetry of Demolition 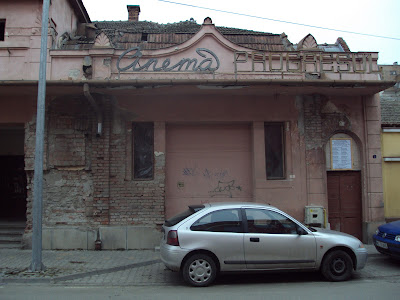 Cinema Progresul was the symbol of our resistance in the communist period of our teenage, a place where escaping from home and from school lessons, escaping from the sadness of uniformity and the whole red stupidity of the system, even by only watching a movie for a few hours was scandalously magic and absolutely fabulous!
For me, as a teenager, it was the place where I saw my first 3D movie, with those paper glasses, a sort of Russian documentary, in which, like at the beginning of the cinematographic adventure, when people were scared of the train ”coming out” on great speed from the screen, the same fear was felt all over again, this time by three-dimensional reality, with animals walking jumping and screaming everywhere in the dark room, near us, ”threatening to eat us alive”...
For one of my poet-lady friends, now living in Bucharest, it was the place of romantic adventures, where she kissed his first shy lover-boy, up in the balcony, while watching ”Cassablanca” or ”On the wings of the wind”, several times in a row.
This escapist thing is now possible every step of the way and that may be a sort of dream come true in the actual century. But at that time, it was love on the first site, and what we believed real progress could be. Those times made possible even Romanian masterpieces of cinematography, like ”Mircea cel Bătrîn” of the Romanian screenwriter and producer Sergiu Nicolaescu. This piece of art, inspired by true events, happened in our epic fighting against the Turkish empire, can stand any time near ”The Seven Samurais” of Akira Kurosawa! As people use to say, these are oldies but goldies, and the heroic spirit of adventure was at his best.
After the revolution, Cinema Progresul was progressively abandoned, left to the mercy of nature and the elements. As many other places become a property in dispute for the court of laws. And thus, nobody took care of it anymore. In time, thanks to the real progress of capitalism, nobody was eager to watch cinematographic pictures anymore. The name of the cinema itself become a sort of sad irony, exactly as ”video killed the radio star” now was the turn of cinema to be killed by the computer. His earthly remains are now just a sort of poetic demolitions. Not for long now, it will be buried in the memory of history, fading away in the mists of the past. This is not Hollywood. This is the kind of tragedy naturally accepted at last by anyone, like death accepted as the happy end of the world.
Publicat de George Asztalos 4 comentarii: